Review: The Female of the Species by Mindy McGinnis 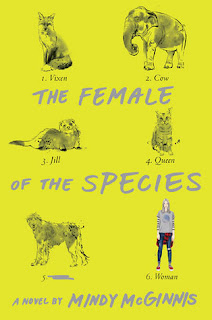 Alex Craft knows how to kill someone. And she doesn’t feel bad about it. When her older sister, Anna, was murdered three years ago and the killer walked free, Alex uncaged the language she knows best. The language of violence.

While her crime goes unpunished, Alex knows she can’t be trusted among other people, even in her small hometown. She relegates herself to the shadows, a girl who goes unseen in plain sight, unremarkable in the high school hallways.

But Jack Fisher sees her. He’s the guy all other guys want to be: the star athlete gunning for valedictorian with the prom queen on his arm. Guilt over the role he played the night Anna’s body was discovered hasn’t let him forget Alex over the years, and now her green eyes amid a constellation of freckles have his attention. He doesn’t want to only see Alex Craft; he wants to know her.

So does Peekay, the preacher’s kid, a girl whose identity is entangled with her dad’s job, though that does not stop her from knowing the taste of beer or missing the touch of her ex-boyfriend. When Peekay and Alex start working together at the animal shelter, a friendship forms and Alex’s protective nature extends to more than just the dogs and cats they care for.

Circumstances bring Alex, Jack, and Peekay together as their senior year unfolds. While partying one night, Alex’s darker nature breaks out, setting the teens on a collision course that will change their lives forever. (Summary from Goodreads)


Okay, where do I begin with this one? I feel like my heart has taken a beating and the English major in me is just itching to analyze every element of this story. I've been in a bit of a reading slump recently, but I could not put The Female of the Species down. When I wasn't reading it, I was thinking about it. When I had it in my hands, nothing else mattered. I just wanted to keep going down this twisting spiral to see what awaited me at the end. Nothing about this book was expected. From the characters to the plot to the writing to the premise, I felt like I never knew what was coming for me. This is definitely a stand-out book and I can't wait to start putting it in people's hands.

Alex Craft was unlike any character I've read before. Her movements, speech, life were carefully crafted and calculated. There was a precision in the writing that always left me off-kilter and on edge. She was fascinating in so many ways. Impossible to forget. I love strong female characters. Strong female characters are my jam. Basically all you have to do is tell me there is a kickass female protagonist in the story and I am there. Alex was a different kind of strong protagonist. Yes, she was physically strong. She could (and did) kick was serious ass. But it was her mentality, the way she spoke, thought, looked at the world that compelled me. Alex was gritty. And I adored her for it.

Sometimes in multi-POV novels, its hard to tell the difference between the characters. POV's bleed together and I sometimes can't distinguish the characters. Alex Craft's point of view was so distinct. Every time her chapters began, I felt like I was jolted violently into her world. Although Peekay and Jack had a lot of rough things going on, it's like I could physically feel Alex when I was reading her POV. She dug her way straight into my soul, and demanded I see every part of her. As for the two other central characters, Peekay and Jack made me love them in different ways. These were not stock, cardboard characters but jagged and flawed people that didn't ask for your approval. Just like everything else in this book, they were unexpected and hard to forget.

To me, The Female of the Species felt like an exploration of violence. There are so many different forms of violence, so many ways for the violence to surface. Violence permeated this novel like an oil slick, infecting everything. Sometimes it was subtle, almost unnoticeable. Other times it was right there for everyone to see. There was an incredibly interesting discussion of enacted and imagined violence between Alex and Peekay during the novel. It's one of the scenes I don't think I'll be forgetting anytime soon, and one that caused me to pause and think. This whole novel had moments like that. Moments where I had to pull back and analyze what was just said. Where I took a look at the very real world I live in and saw so many similarities to this created one. I love novels that allow me a new perspective on the world, and The Female of the Species definitely did that.

Besides being an exploration of violence as a whole, The Female of the Species subtly examined the violence of rape culture. It was the undercurrent of the entire story, surfacing time and again in new and sometimes unexpected ways. It was hard to read at times because it so closely mimicked life. The Female of the Species stripped away the mask and left the raw violence of rape culture exposed. And showed just how complicit people are in it. And how it so deeply effects women.

There's really only one problem I had with this book and it was the animal cruelty aspect. I'm a huge animal lover, and reading about animals in distress really upsets me. I've avoided entire series because of it. Therefore, the opening couple of chapters of Female were difficult to read. I understood the point of them, the role these scenes played, but it was a little too much for me.

There's literally so much more I could talk about (including Branley's character and how societal expectations on women are so damaging) but this is already a pretty long review. And I barely even talked about the plot itself! This review doesn't do the book justice. Maybe if I could write a ten page essay on the subject, I would be able to accurate capture the beauty of this novel. The Female of the Species was just a treasure: a dark, twisted, brutal treasure. It's a novel I'm going to think about for years to come, and one I can't wait for people to read. Definitely pick up this book. Then pick up another copy for your friend.

Find This Book: Amazon | Chapters/Indigo | Goodreads | Mindy McGinnis | HarperCollins
Posted by Ciara (Lost at Midnight) at 12:00 AM No comments: